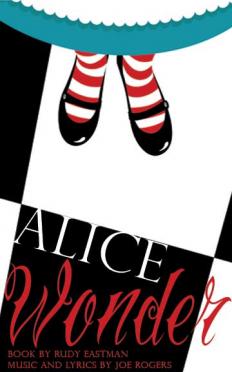 Alice Wonder was exactly that: a Wonder. The musical was performed beautifully and energetically. I believe the audience left as exhausted as the performers but well satisfied.

It would be cliché to say that Alice Wonder was doing for Alice in Wonderland what The Wiz did for The Wizard of Oz. This musical deserved more than tired clichés. From the beginning of the musical to the end the tone was like an energetic romp through, according to the program, “the mind of a stressed out, overworked 37-year-old, modern day black woman”.

The musical opened with Alice (Sheran Goodspeed Keyton) standing on her front porch/stoop complaining about the problems of her day. While Alice was going through her list of issues a few characters like Mrs. Dukane (Melinda Allen) popped up to add to the already mounting problems. One of the things Alice (Keyton) was complaining about was the fact that her dog left dead animals on her porch. I assumed this related directly to the white rabbit. During the complaints, Alice was talking/staring into a trash can.

Most animals don’t place their master’s trophy directly into the trash so it seemed odd that Alice would be looking in there. The music started, the white rabbit was racing around and the cast came out to transition Alice to Wonderland. The musical then followed Alice on her journey through Wonderland as she tried to make it home in time for her daughter’s event. It was in Wonderland that this musical truly shone. The cast was at ease performing the songs and dance routines at each stage of Alice’s journey.

My companion and I were a little concerned at the outset of the musical, with the first song and opening performances of some of the characters. Alice sang the first song well and the rest of the cast performed their choreography with precision but the beginning, and this may be a script critique, almost seemed like an afterthought. The lighting was a sickly bluish hue that cast Alice in a ghastly light.

If the intention was to show a marked contrast between the drab, dull world and the bright Wonderland, then job well done. The set design for the opening was a few sheets hanging from the ceiling and a tiny porch front. The minimalist design blocked a good portion of the actual set that was behind for the Wonderland world. Rosco Rabbit (Aaron Petite), while racing in and out of scenes on a scooter, nearly tore down a sheet on both sides of the stage. Additionally Rosco Rabbit referred to Cat Daddy (Robert Rouse) as Rosco on several initial lines.

The seating was auditorium style so there were no bad views but the seats themselves seemed too close together and cramped. All in all the first 10 minutes were not looking too grand but, thankfully, the first act is an hour and fifteen minutes.

Once Alice hit Wonderland it was a whole different story. For me it was at this point that the musical began. The lights were brighter, the music was louder and the tone was much more energetic. Some of the characters were familiar in name but had a completely different spin. Cat Daddy came onstage to applause while the Queen of Hearts’ (Major Attaway) entrance was met with riotous laughter. Each character added a layer to the complexity that was Alice.

We are, after-all, in Alice’s overworked mind. One of the standout characters was Sister Dukes played by Melinda Allen. While the scripture line delivery by Sister Dukes seemed wooden and rehearsed the actual song “He Gave to Me” felt like a wave trying to drive everyone to their feet. The intensity with which the song was performed left the audience and Allen breathless. If the aisles had been wider I imagine there would have been several people standing with hands in the air clapping and singing along with the revival.

In contrast, “So Big” by Notorious Hump D (Bob Allen) was yelled rather than sung. Granted the rap song was not going to have the same feel as the other songs but in my opinion it could have done with a bit more polish. The biggest laugh of the night was when the Queen of Hearts rode out atop a pink toilet holding a plunger covered in hearts and gold thread as a scepter. Unexpected to say the least. (According to the program Keron Jackson will be playing the Queen of Hearts for all shows June 9 – 26.)

The set design was interesting but I’m not altogether sure was appropriate. The design was an amalgamation of hubcaps, trash can lids and road signs, including a two-story scaffolding that rotated on wheels. It was more akin to a junk yard than the world of that stressed out, overworked modern day woman.

The costumes were wonderfully simple. The white rabbit had jeans and a fluffy white tale. Cat Daddy’s suit was exceptional in its orange tabby hues. During several of the songs the cast would dance their way onstage in different attire that matched the main character’s song. While Rasta Blue (Durant Searcy) sang “Come Fly” the rest of the cast danced around in a drug induced stupor with dreadlocks. The white rabbit adorned with dreadlocks; priceless. As Sister Dukes sang about righteousness, the rest of the cast danced about in choir gowns. A Rastafarian wearing a choir gown; superb. The ruby slippers that Alice wore were a nice touch as well.

The choreography was intense. If there were dance errors or stumbling,
the audience was not aware. As each main character belted out their song in Alice’s adventure the chorus was alive with singing and dancing. Some of the funniest moments happened in the background.

The house band was finely tuned. The music was performed offstage and enhanced the overall experience.

One side note about the theatre and not the performance – the theatre gave me the warm feeling of being at a friend’s house. During the co-founder and director’s speech they honored a couple that had been married for over 60 years (64 if I remember correctly). A caveat was delivered by Nettie Vinson at the outset of the musical that due to the configuration of the theatre anyone attending late would have to be seated at an appropriate time as to not disturb the performance. Unfortunately this guideline was not followed.

This was the first time this musical had been performed by Jubilee Theatre since 2002. The theatre, now in its 30th anniversary season, had revived at least one gem from their original works. Alice Wonder was a treat in every sense of the word. The songs, dances and characters were dynamic and passionate. It was a delight to watch and will be enjoyed by all.

Shows are Thursdays, Fridays and Saturdays at 8:00pm with
Saturday and Sunday matinees at 3:00 pm.

For tickets and information, please call 817-338-4411 or
go to www.jubileetheatre.org