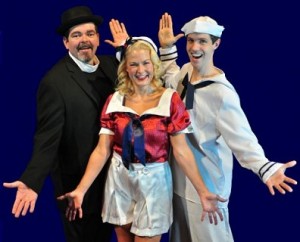 Anything Goes by the Stolen Shakespeare Guild was truly “Delovely”.

The fun began the moment the lights dimmed for the beginning of the musical. The cast paraded out to the spot light, one at a time, introducing themselves with their name embroidered on a life preserver ring. Each character shouted out their signature line as if sounding off for roll call. It was definitely a unique and inspired method of introducing the characters. After the characters were introduced, the musical mayhem aboard the S.S. American was set to sail.

The story is one of love lost and found. Hopeless romantic Bill Crocker, while brokering a cruise for his boss Mr. Whitney, discovers that his lost love Hope Harcourt is aboard the vessel with her fiancé, stodgy Sir Evelyn Oakleigh. Determined to win back the heart of Hope, Billy stows away aboard the ship. With the aid of a few unlikely friends – a lovable thug named Moonface Martin and Reno Sweeny, a nightclub temptress – Billy attempts to avoid capture by the pursers, ruin the engagement of Sir Evelyn and win the hand of his true love Hope. The laughs abound and the tap dancing feet fly furiously during the high seas hi-jinks.

The set was a minimalist design consisting of a two tier deck with an image of the ship’s smoke stacks cut out in the background. The design functioned well considering the majority of the action took place on the open decks. When the musical required an indoor cabin atmosphere, a bed or desk with chairs was moved on stage. For the most part the minimalist design worked well allowing the dancers to tap or spin their way on the stage. However, the set could have used a few more doors. The actors were able to pantomime the opening and closing of the cabin doors with some degree of ease but the lack of consistency in the method and the openness of the stage made it difficult to get the feel of being inside the ship. The openness though did allow smooth transitions onto and off of the stage.

The costumes were colorful and appropriate for the time period depicted. I was particularly impressed with Reno and her angels’ outfits. Reno’s wardrobe with its sequins and bright colors was a standout befitting a nightclub singer. I thoroughly enjoyed the angels’ outfits as well. The fact that all four of Reno’s backup singers wore similar outfits 24/7 gave the impression that Reno, the nightclub act, was never far from song.

The music was acceptable but lacking. Whether by choice or spatial insufficiency, Stolen Shakespeare Guild’s production proceeded with only piano accompaniment. Don’t get me wrong; the pianist that accompanied the songs was phenomenal, but during every song I kept expecting additional instruments to fire up in order to give the song that certain something extra. That UMPH! I’d never seen this particular play before and if it was a movie, I’d never seen that either. The songs just seemed to be lacking ‘something – like a rock concert without a drum.

The acting was superb. The entire cast came together to deliver a fun-filled, heartwarming adventure on the seas. Ryan Page as Billy Crocker was a delight to watch. His facial expressions combined with his energetic performance were a joy to experience. The songs he sang were projected well and the choreography during his dance routines was impressive. There were a few times during a spin here and there that he missed his dance partners hand but overall the dancing was seamless. Page never let the missteps alter his performance.

Jenny Tucker gave a wonderful performance as Reno Sweeny. Tucker was warm and charming during the “friendship” phase of her performance but also sultry when it came to being a nightclub temptress. Her songs were fresh and well done.

A dynamic duo in the cast was that of Bonnie and Moonface Martin. Both characters were well cast and the New York accents were well articulated. Becca Brown was superb as Bonnie the bubbly, energetic sidekick to Bill Sizemore’s Moonface Martin. Brown’s songs and tap dancing had the audience bouncing in their seats while Sizemore had the audience rolling with laughter in the aisles. When Moonface went trap shooting with his Tommy gun the audience roared with laughter.

Shannon Walsh as Hope Harcourt put in a solid performance as the love interest of Billy Crocker and Sir Evelyn. Walsh did an excellent job portraying the many emotional facets of her character’s love interests. From her despair at marrying an unemotional Englishman, to her love song duet “All Through The Night” with Billy, Walsh kept the energy and emotions high.

While understated in the musical, Robin Attaway’s performance as Mrs. Wadsworth T. Harcourt was anything but understated. Attaway’s portrayal of the demanding and snotty, rich mother to Hope was classic; the classic overbearing mother who was forcing the daughter to wed out of her own desire to maintain a certain status. Attaway performed it well.

Steve Lindsay did a masterful job of portraying Sir Evelyn Oakleigh. The English accent felt genuine. His bumbling, naïve, English gentleman performance was both endearing and heartwarming. When Sir Evelyn was sitting in his stateroom in his boxers and sock suspenders being “seduced” by Reno, it was priceless. The performance was inspired and the laughter was uncontrollable.

A couple of the characters, while understated in the musical, were nonetheless well played. Bennet Frasier played Mr. Whitney, Billy Crocker’s boss and David Plybon played The Captain. Frasier did a good job playing the loud and demanding boss. Plybon did well as The Captain. Both actors carried their scenes well and added to the ensemble cast during the chorus.

In most musicals the ensemble cast adds an extra element to the scenes or songs by portraying additional background characters. In Anything Goes the ensemble cast did a wonderful job as additional cruise ship crew and passengers on the boat. The transitions were seamless and at times it seemed like there were more people on the boat than were actually in the cast. It was well done.

It appears, much to my delight, that not all musicals from the Stolen Shakespeare Guild (SSG) are Shakespearean. The SSG proves without a doubt that its ability to entertain reaches past The Bard and straight into Broadway. The songs were upbeat and lively. The cast was talented and the performances were well executed. For a top notch, entertaining experience – Anything Goes.

For tickets and information, please call 214-789-8032 or go
to www.stolenshakespeareguild.org