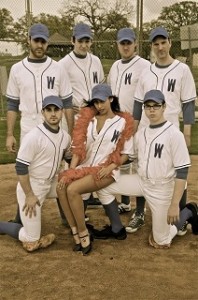 Damn Yankees by Onstage in Bedford is devilishly good fun. The musical is based on the novel The Year The Yankees Lost the Pennant by Douglass Wallop.

The musical opens with Joe Boyd, a die hard Washington Senators baseball fan, watching yet another game, much to the lamentations of his wife Meg. After yet another loss to the New York Yankees, Joe Boyd announces that he would gladly sell his soul for a winning season. Upon hearing the outburst, Mr. Applegate appears and offers Joe the chance to lead his favorite team, the Washington Senators, to the pennant for a small price; his eternal soul. Joe, realizing that this is his life-long dream, agrees to the deal but only after Mr. Applegate allows an escape clause.

Joe can back out any time before the last game of the season, otherwise he forfeits his soul. With the deal struck the game was on. Mr. Applegate transforms Joe Boyd into Joe Hardy, a dashing champion baseball player and gets him a shot with the Washington Senators. Joe quickly starts to get homesick for his previous life with Meg and starts the murmuring of backing out of the deal. Mr. Applegate, not being one to lose graciously, attempts to keep Joe in the deal by stacking the deck against him with the beautiful temptress Lola.

The costumes were appropriate for a 1960ish era. I particularly enjoyed the hairdo and makeup design for Sister Miller and the eyebrows of Mr. Applegate. The only problem with costuming that I saw was the W for the Washington Senators was falling off the hats on some of the players. It was only noticeable during some of the dance routines so it didn’t really distract from the musical.

The lighting was well done. There was a warning on the door to the theater that a strobe light would be used. No one was noticeably affected by it and it was weaved well into the story. I did notice that during the production number “Shoeless Joe from Hannibal, MO” the lights went dark a tad too early and the audience was deprived of the finale stance that the players and Gloria Thorpe were posed in.

The set design was good as well. The stage converted from the Boyds house to the Washington Senators locker room with the ease of sliding some old time wooden lockers onto the stage which looked vintage. They reminded me of old news footage that showed black and white baseball interviews in the locker rooms. Charlotte Newman did a wonderful job designing the layout of the stage.

Meg Boyd, played by Kimberly Smith belts out a wonderful version of “Six Months Out of Every Year”. When the play first started it was difficult to understand Smith’s dialogue over the television background noise but as soon as she started singing the scene took on a whole different tune. The words were masterfully sung and the ensemble choreography was beautifully performed. Smith not only sung well as a solo but also did an awesome job with her duet with Michael Pricer who played Joe Hardy. The reprise of “A Man Doesn’t Know” with Smith and Pricer was endearing and heartfelt. “Near to You” was another tearjerker between Joe Hardy (Pricer) and Meg Boyd (Smith) in which the emotions could be felt in the song.

Michael Pricer did a wonderful job as Joe Hardy. He maintained the connection to Joe Boyd well. It felt as if he was just a younger version of Boyd. Additionally the duet with Lola, “Two Lost Souls” was superbly performed and a joy to watch.

Gina Gwozdz as Lola gave a stand out performance. She was sultry and sexy. Everything you would want in a devilish temptress. Her rendition of “A Little Brains, A Little Talent” was superb. Additionally, her duet, “Who’s Got the Pain”, with Smokey played by Andrew Chard was energetic and exciting. I was exhausted just watching her dance around the stage. It seemed that in every song Gwozdz sang she was twirling and pin-wheeling across the stage with energy and enthusiasm. She was definitely a marvel to behold.

The ball players were another dancing force to be reckoned with. The energy that they gave in each performance was astonishing.

One of the high-lights of the evening was George Redford’s rendition of “Heart”. Redford played Benny Van Buren the coach of the Washington Senators. Redford’s performance was perfect and the song continued to be sung by my daughters who attended the musical with me. It was truly an inspired and heartwarming moment.

Finally, Tom DeWester as Mr. Applegate was worth the price of admission. DeWester is a wonderful character actor and always a joy to watch. He displays great comic timing and a wonderful charismatic attitude. He made it possible to both like and despise Mr. Applegate. His rendition of “Those Were the Good Old Days” was superb. He had the audience laughing and rolling in the aisles.

The choreography was incredible and I would be remiss if I did not congratulate Eddie Floresca on a job well done. The dancing was wonderful and each musical number received applause.

Damn Yankees by Onstage in Bedford is what great musicals are all about. The songs were enticing, the actors were superb and the feeling in the air at the end was one of Hope. This is one musical that should not be missed.