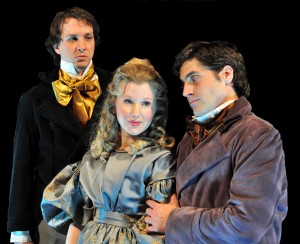 To see, or not to see, that is the question.

In my opinion, the only answer is – TO SEE.

The back story for this particular play is as intriguing and enchanting as the play itself. According to the “cheat sheet” there is some debate on whether or not this play is actually a work of William Shakespeare. The director is kind enough to include a fairly lengthy synopsis of the play, background on the authorship and notes of his additions or changes. It is well worth the read. I suggest arriving early so that you can peruse it because both my wife and I felt it was easier to follow the play having read the “cheat sheet”.

The play is about the youngest son of a duke, Hendricks (Christopher Reaves), who becomes infatuated with Violante (Jill Ethridge), a virtuous local girl of humble birth. After she rejects his advances Hendricks forces himself upon her. After the rape Violante disappears and Hendricks tries to convince himself that it wasn’t rape because Violante did not cry out. Meanwhile Julio (Thomas Fletcher), who is in love with Leonora (Lauren Morgan), is called away to court on behalf of Hendricks. Julio wants to arrange a marriage between himself and Leonora but only after he returns from court. Hendricks, however, purposely sends Julio to court so that he can pursue Leonora.

Don Bernard then pledges his daughter Leonora to marry Hendricks. Leonora, still in love with Julio, sends a secret letter to court to warn Julio of the impending marriage. Julio returns to stop the wedding and a confrontation between Julio, Camillo, Don Bernard, Hendricks and Leonora ensues. The confrontation ends with Julio being ejected from the town and Leonora disappearing into the night. Don Bernard and Camillo are left to deal with their distress at the loss of their children. Roderick (Carter Frost), the eldest and virtuous son of the duke, arrives to comfort the two and sort out the mess.

In Act IV we find Violante posing as a shepherd boy in the wilds in order to work through her feelings for Hendricks and the rape. Julio is also in the wilds but he is wandering aimlessly, assaulting shepherds for food and lamenting his bad fortune. During one such attack on shepherds, Julio meets Violante and is immediately suspicious that she is not actually a shepherd boy. The Master of the Flocks (Tyler Cochran) overhears the conversation Julio and the Citizen (David Johnson) have concerning Violante. Discovering that she is not in fact a shepherd boy, the Master attempts to assault Violante. The assault is thwarted by Roderick.

Hendricks discovers that Leonora has taken refuge in a nunnery and enlists the aid of Roderick to get her back. Roderick, having spoken with Violante and Julio, hatches his own plan for a grand reconciliation and confrontation.

These actors deserved a better venue for their performance. The play was performed in the Hardy and Betty Sanders Theatre. Unfortunately for the Guild a wedding reception was being held at the same time. The thin walls of the theatre allowed the booming music from the reception to sully the first Act. It is difficult to perform Shakespeare. It was more difficult to perform Shakespeare with “Whoop! There it is” pounding through the walls.

The lighting was what I would refer to as traditional. The scene would end, the lights would go black and the actors would enter or exit the stage. The lighting transitions were flawless. The problem was in the play. I’m not sure if it was by design or by necessity but the lighting during the play detracted from the overall feel. The lights shone from the back and over top of the actors. The closer the actors got to the audience the more shadows covered their faces. A few times the actors’ faces would be completely darkened by shadows and the emotion being conveyed was lost.

The set design was minimal. A balcony with faux marble columns served as the backdrop for the entire play. The only additions were a bench, some chairs and a coffin. It would have been nice to have at least a tree on stage during the scene in the wilds. I imagine given a longer run the set designers would be more than capable of wowing the audience. I believe the theatre was being shared with the Guild’s Henry V production and that may be one reason why a more detailed set was not utilized.

The costumes were marvelous. The dresses were ornate and flowing. My wife did comment that she thought Leonora’s first dress was ill fitted. The men’s costumes were equally impressive with bold, colorful vests and coattails. The costumes added a certain ambiance to the period piece and gave the feeling of Old Victorian times.

The first half of the play was a little stiff. The actors seemed uncomfortable with their costumes and a few had trouble with their lines. Most notably, Don Bernard (Corley) stammered quite often in his confrontation with Leonora (Morgan). One notable performance in the first half was that of Eddie Zertuche who played Camillo, father to Julio. Zertuche’s performance throughout the play was both passionate and well played. His lines were delivered poignantly and without delay even in his most desperate of times.

The second half of the play was for me both bitter and sweet. It was far more passionate and better performed than the beginning. It was like waking up from a sleepy dream.

In the first half of the play Thomas Fletcher who played Julio acted as if he was trapped in his costume and delivered his lines with rote accuracy. In the second half, stripped and languished in ‘the wilds’ with only a shirt and pants, he shone. His thrashing about on the ground in tormented agony over his lost love was both believable and, from a performance perspective, enjoyable. During the final confrontation though, when he returned to his nobleman clothes, the passion drained.

Another strange metamorphosis from the first half to the second was in Jill Ethridge’s portrayal of Violante. Her assault and aftermath was devoid of any heart. I didn’t feel the torment she must have been dealing with. Then in the second half Violante came alive. The shame that drove her to hide herself as a shepherd boy was felt, finally culminating in her confrontation with Hendricks (Reaves). Roderick, played by Carter Frost, while not having a large part in the first half, was another steadfast character in the play. Frost’s second half performance was beautifully performed and a highlight of the play. He played Roderick both virtuously and humorously.

The odd part of the second half was The Master of the Flocks played by Tyler Cochran. From the moment he stepped onto the balcony to survey the stage his demeanor seemed at odds with his character. The other shepherds, being under his employ would, merely by his title of Master, have had some respect for him. I didn’t get that impression. In fact, the whole scene involving the shepherds and Julio was odd. Cochran seemed more worried about losing his hat during the fight with Julio than actually fighting with Julio. Later, the inappropriate sexual advance by The Master of the Flocks towards Violante in the guise of the shepherd boy seemed strained and unbelievable.

The actors on the whole performed this play admirably and it was very enjoyable. I would recommend it to anyone. It is a shame that the limited run will not allow a greater viewing audience. I agree with the Director’s notes – while the play is not a masterwork it is an “incredibly interesting and entertaining piece of theater”.

Playing in repertory with Henry V. Stolen Shakespeare Festival
Pass is $20.00. Individual tickets are $17 for adults, $15
for seniors and students and $10 for children 7 and under.