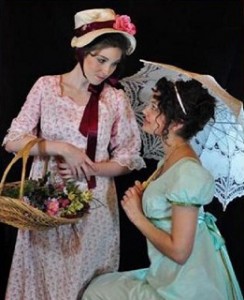 The Stolen Shakespeare Guild puts in another top rated performance. Emma is a play by Jon Jory, adapted from the novel by Jane Austen, and the Stolen Shakespeare Guild does a phenomenal job of bringing the book to life. The story involves a precocious twenty something woman who, after swearing off marriage, embarks on a series of matchmaking endeavors towards the inhabitants of Highbury. Deluded by past “success”, Emma makes it her mission in life to find a suitor for Harriet Smith, a friend of hers that lacks the same social standing. But as Emma becomes involved in the romantic lives of those around her she falls in love with a most unexpected bachelor.

The single stage setting served both as the streets of Highbury and several residences. The design of the hanging picture frames in order to introduce characters was a wonderful idea. As Emma and Mr. Knightly discussed the inhabitants of Highbury, the residents would appear and pose within the picture frames. It was an ingenious way engaging the audience.

The costumes were period authentic and well made. The men wore waistcoats and top hats and the women had long flowing dresses and, at times, bonnets. The costumes were wonderfully tailored and fit all performers rather well. I was a little taken back by the lack of wardrobe changes however. Some of the women had additional dresses but it appeared that the men wore the same outfit day in and day out. The play covered a span of several months but it appeared that the men never actually switched outfits.

The lighting was done as well as could be expected in the theater. The Guild deserves a better theater for their performances but alas they must make do with what they have. The overhead lighting was difficult to deal with when the performers wore hats or bonnets because the shadows made it hard to see their faces.

The actors did a phenomenal job in their performances. The accents were old Victorian and wonderfully crafted. The scenes did not feel rushed and the interactions between characters felt genuine. Janelle Lutz did a wonderful job in her portrayal of the precocious Emma Woodhouse. She had the perfect blend of inquisitiveness and stubbornness that would be found in the self-absorbed Woodhouse.

Porcia Bartholomae as Harriet Smith gave an inspired performance as the target of Emma’s matchmaking. Bartholomae believably portrayed Harriet as a truly naïve and socially awkward woman whom Emma could manipulate into different social situations. The chemistry between the two seemed genuine and affectionate. Bartholomae portrayed the feeling that Harriet put those above her social standing on a pedestal. She seemed happy with her standing in life but was easily talked into aspiring for a higher status by Emma.

Hazel Murphy as Miss Bates was truly a joy to watch. Her mannerisms and ramblings provided some comedic relief. Out of all the actors, her character seemed the best suited for comedy, and she played it well.

John Tillman did a superb job as Mr. Knightly. He had the mannerisms of an old Victorian gentleman, staunch, stodgy and stuffy, yet conveyed his feelings through his many facial expressions. His performance was one of the ones that seemed the most damaged by the overhead lighting. Tillman had a wonderful way of performing facially and it was a shame that the shadows from the hat took away from that.

Billy Betsill’s performance as Frank Churchill was a pleasure to watch. He was animated and lively when he came on stage and conveyed his feelings for Emma masterfully. The only issue I had concerning this performance was that his hat seemed a little big for his head and sat, in my opinion, too low.

Michael Shane Hurst did a great job as Mr. Elton. The way he projected his feelings towards Emma and the manner in which he carried on as Emma tried to match him with Harriet was perfect. You could tell he was interested in Emma even if everyone else around seemed oblivious to the matter. The way he glanced at Emma as he greeted her or the way in which he sat towards her was truly masterfully performed to give focus to his feelings. Hurst’s costume was also well done for his character and really resembled a vicar’s uniform.

Jason Morgan as Mr. Weston and Ester Selgrath as Mrs. Weston performed well. They had on stage chemistry and carried their parts well. Emma’s former nanny and confidante, Selgrath, had more stage time which she carried admirably. Whereas Emma was quick to action, Mrs. Weston was more reasoned and logical in her pursuits.

The two seemed against each other and yet maintained the familial relationship of a nanny and her charge. Selgrath was able to convey Mrs. Weston’s deep feelings for Emma both vocally and physically.

Another joyful performance to watch was that of Karen Matheny as Mrs. Elton. Mrs. Elton seemed to put the other characters on edge. It was as if an intruder had entered their sleepy little town and stirred up trouble. Her boisterousness and overbearing personality was just the shot in the arm the old town needed and Matheny played it wonderfully.

Amanda Gupton as Jane Fairfax seemed an underrated character in this play. Fairfax seemed sickly and out of sorts during much of the play. Without providing any spoilers, the character had her reasons for being sickly and demure. However, I got the impression that Fairfax was supposed to be a rival of Emma and I didn’t feel that the character achieved the necessary depth to be anything more than an afterthought for Emma. Gupton did well in the part but I felt the character should have had a stronger role.

Delmar H. Doblier as Mr. Woodhouse was another character that seemed to steal the show as comically as Miss Bates. Doblier’s performance as the aging Mr. Woodhouse was believable. Doblier did an amazing job projecting his voice during his scenes. The impression was that of an old man with slight hearing impairment. A kindly old gentleman settled in his ways.

Becca Brown and Sergio L. Rodriguez comprised the supporting roles of party guests. Additionally, Rodriguez played Mr. Martin, the initial love interest of Harriet Smith. Both Brown and Rodriguez did well with their supporting characters and were really the highlight during the party dancing scenes with their spirited revelry.

If you are a fan of Jane Austen and solid theater performance you should catch this play. The costumes were impressive and the acting was amazing. It’s a shame this play has a very limited performance schedule. Everyone should see it at least once.

by Jon Jory. Adapted from the novel by Jane Austen
Stolen Shakespeare Guild