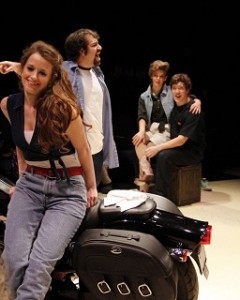 Footloose, as produced by Artisan Center Theater, is the story of one family and one town’s journey to overcome loss and grief. The story centers on a recently divorced Ethel and her spirited teenage son, Ren, as they move to a small town from the big city of Chicago to escape the emotional demons of their past. However, the small town of Bomont has its own emotional demons to exorcise.

A few years back, a car accident resulted in the death of four teenagers. It was alleged that the teens had been involved in alcohol and drug use. After the accident, the town, led by Reverend Shaw, whose son was one of the boys killed in the accident, sought to ban all “negative”; influences that would affect their children. One of the many things banned for its negative influence was dancing.

Upon Ren’s arrival to the town he is considered a “negative”; influence and trouble maker for his modern ideas of freedom and youthful exuberance.

It quickly becomes apparent that Ren’s outgoing personality is seen as a destructive force that Reverend Shaw must deal with before his quiet town erupts into chaos.

The battle of wills between Ren’s youthful push for freedom of expression and Reverend Shaw’s tyrannically imposed iron grip of controlled safety is the battleground of our musical.

Artisan Center Theater’s rendition of Footloose was excellent. Dennis Canright did a masterful job directing. Canright’s creative blocking and scene changes were inspired. Add to the fact that Canright also had a hand in the set design and you have a perfect foundation for this high energy musical. The set design was well planned. The style of the set pieces and the flexibility that Canright put into each was truly a work of art.

I especially enjoyed Scene 4 in which four girls on skates sang “Somebody’s Eyes”.

The fluidity of the scene was impressive. The girls skated in a large circle, singing. After a few lines of song they skated off in one of the four directions while the lights came up in an opposite corner where the other cast members acted out a high school scene. It was a moving montage of complex choreography and it worked well. The only down side to the scene was that Macy Rand, who played Rusty, appeared severely unsure of herself on the skates and at one point fell. Rand’s skating was very unsteady and it impacted the fluidity of the scene as a whole.

Set design and choreography was impressive in the diner during Scene 6: The Burger Blast. During the song “Holding out for a Hero”, the booth in which the four girls sat was rotated and spun by ensemble cast members as they danced. At one point Ren, played by Kevin Acosta, swung out from the side of the stage on a rope while Ariel, played by Meredith Stowe, stood atop the rotating diner table and sang “Holding Out for a Hero”. An offstage smoke machine billowed smoke as Ren swung into the diner in a true swashbuckling heroic manner. The moment was exciting. The audience cheered. Well done Canright.

Finally, my favorite piece of set design was in Act II Scene 4: Under the Train Bridge. During the musical, the bridge was split into two pieces on either side of the west side of the audience. From the beginning, it was impressive as just a part of the barn or church but when it “transformed&quot; into the bridge where the accident took place and was this massive construct in the middle of the stage, it was awesome.

Ren and Ariel stood atop the bridge singing “Almost Paradise” as the smoke from the river covered the ground. I got goose bumps. The two young lovers, in this scene where they shared their pain, was beautiful.

The cast did a phenomenal job and maintained the high energy required throughout the musical. A wonderful performance overall was by Mark Winter as Reverend Shaw. Winter was the total package. He could sing, act and, in each scene, be heard.

There were a few points in the musical in which other actors’ voices were lost in the crowd but Winter was clear and concise in every scene. His rendition of “Heaven Help Me” in Act I, as he sang out for help from God was, heartfelt and inspired. Winter was an excellent Reverend Shaw and a real pleasure to watch.

Kevin Acosta did an excellent job as Ren. His acting and singing abilities were outstanding. Acosta’s dancing in Act I Scene 4: A High School Hallway was very well performed and his rendition of “I Can’t Stand Still” was great.

Meredith Stowe did a superb job in her performance as Ariel. Stowe was believable and likable as a preacher kid with a desire to escape the confines of small town living. The majority of Stowe’s songs was understated and could have been sung with greater intensity.

However, as stated previously, she had a couple of stand-out performances. Her voice never seemed to waiver and the words were clear. Stowe could have been stronger in the duet with Acosta but overall it was touching and impressive.

Another wonderful performance was by Tamera Miller as Vi. Vi was the pastor’s wife and had one of the more emotional performances in the musical. As other characters laughed and danced, Vi remained pensive yet hopeful of seeing her husband return to his normal loving self. Miller set the mood with her haunting dreamy rendition of “Learning to Be Silent”. Miller was joined by Meredith Stowe as Ariel and Jenna Hill as Ethel in this song. However, the strength of Miller’s singing far outshone those of Hill and Stowe. Miller’s performance of “Can You Find it in Your Heart?” was another beautiful song in which she was able to capture the longing of the pastor’s wife. Miller sang with such feeling that you could feel it in your own heart. Miller conveyed in song the longing of a grieving mother for her child but also for the husband who had emotionally distanced himself.

Remi Budge did an amazing job as Willard. Willard is the shy yet protective comic relief and best friend of Ren. When Willard was learning to dance in Act II Scene I, the audience was laughing and cheering. Budge did a wonderful job keeping a straight face as his friends attempted to teach Willard how to dance. Additionally, Budge’s performance of the song “Mama Says” was one of the funniest of the entire musical.

Jenna Hill as Ethel, Ren’s mother, did a great job. While her character did not have a solo song, Hill was the inspiration behind Ren confronting Reverend Shaw on a heart to heart basis. Hill’s heartfelt and compassionate plea for Ren to go after what he wanted was truly uplifting.

Cameron Allsup did a fair job as Chuck, Ariel’s ex-boyfriend. Chuck is a minor character in the musical and not a true antagonist.

Allsup’s rendition of “The Girl Gets Around”, was weak and often times his voice was completely drowned out by the other singers or the music. His dancing was awkward and wooden. If the character had completely disappeared after Act I Scene 3, I don’t believe anyone would have noticed.

Macy Rand played Rusty, Ariel’s best-friend. Rand can act and her best performance was when she was acting ditzy and in love with Willard. Her tone and mannerisms were well played and believable. However, Rand’s “Let’s Hear it for The Boys” was awkward and poorly sung. By the finish of the song Rand seemed out of breath and struggled to finish the song.

Finally, Chuck Ellis played the dual role of Wes, brother-in-law to Ethel, and Cowboy Bob. Ellis did an amazing job as Wes. His southern
accent and his manner added depth to a supporting role. However, his song “Still Rockin'” was simply sub-par. I’m not sure if it was intentionally designed to be that bad or if it was just a bad day to be Bob. The song from the beginning seemed off cue and often times the words were unintelligible.

Artisan Center Theater’s production of Footloose is a high energy, high- intensity musical that dances onto the stage from the very first song and keeps on rocking until the end. Footloose, directed by Dennis Canright, was an amazing and enjoyable musical suitable for the entire family to enjoy. Everybody should “Cut Loose” and dance on down to see this one.

(This production is double cast. This is the cast list
for the performance reviewed)