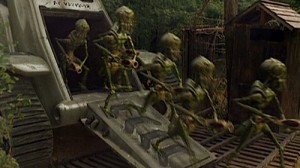 I hope it happens.  That’s right.  I put it out there.  I’m hoping for a Global Alien Apocalypse…not the kind that comes from Obama legalizing thousands of illegal immigrants (which is, according to some, what will happen).  No.  I’m talking about the kind like V or Falling Skies.  True, born on another planet extraterrestrials coming to Earth to slap our silly culture around.  Why you ask?  Why would I be hoping for that?  Unity.  I watch those shows (fan of the original V, not the remake) and there we are…bands of freedom fighters trying to save the Earth and all humanity from some impending destruction.  We are not squabbling over this or that…we are fighting, together, as one force.  A force to be reckoned with.  Imagine if, as a whole, the world came together to battle a destructive force bent on destroying Humanity and all of Earth…  You would fight.  You would fight hard.  You would fight to the end.  You would fight shoulder to shoulder with the person next to you and it would never occur to you that that person was black, white, red, muslim, hindu, atheist, christian or whatever other negative label you put on them.  They would simply be someone covering your a$$  Why?  Because it wouldn’t matter.  Those things don’t matter when facing extinction.

Live as if you are facing extinction.