Home › Theater Reviews › Mistakes were made 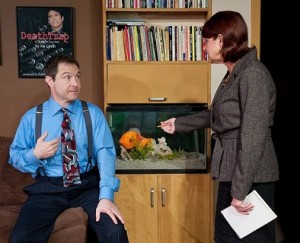 Mistakes Were Made by Circle Theatre was a high energy romp through a theatre producer’s day from hell. If it could go wrong for Felix Artifex, then this was the day for it. Mistakes Were Made, written by Craig Wright, essentially follows a day in the life of Felix Artifex – a bad day. Felix is a New York-based, Broadway producer who is attempting to produce “Mistakes Were Made”, a brand new play about the French Revolution.

The play opens with Felix Artifex attempting to finalize a deal with a popular movie actor. In Felix’s mind, if he can sign the mega-star to the Broadway play then the play’s success is virtually guaranteed.

There would just be a few “minor” hurdles to overcome, such as financing the project and the actor’s demands. The problems, like a pressure cooker, slowly begin to mount as Felix attempts to put out one fire after another. Can Felix get the actor, get the financing, and finish the production or will the house of cards all come crashing down around him?

Clare Floyd DeVries set design was well done. The play took place in Felix Artifex’s office in New York. The office was very well detailed
with a desk, sofa and some chairs. The back wall was covered with books as well as a window. Circle Theatre did an excellent job of utilizing their space. At first glance I was concerned that the large black pillars that supported the theatre would be a hindrance to viewing. However, the choreography and movement was well staged and Steven Pounders played to the audience at every turn.

The costume design by Drenda Lewis was excellent. Felix Artifex wore a suit with suspenders, and when you finally saw Esther; her costume was appropriate and believable as a receptionist. Pix Smith’s puppet design for Denise was very good and the puppetry was well choreographed.

Steven Pounders was superb in his portrayal of Felix Artifex. The play was ninety minutes with no intermission and Pounders had energy every step of the way. His performance was like a slowly building symphony of destruction. As each new problem arose, Pounders performance got more and more animated until finally peaking with him standing with his pants around his ankles, raging into the air. It was inspiring to watch as Pounders masterfully juggled several phone calls with different levels of agitation and discomfort. His tone brilliantly switched from compassion to utter disbelief as he fielded problem after problem in his quest to put on a Broadway production.

Lana K. Hoover did an excellent job as Esther. Her constant interruptions via the intercom felt genuine and when she appeared on stage her compassion for her boss was heartfelt.

Denise, the goldfish, was another excellent addition to the cast. The puppetry was well done and Denise appeared to follow the flow of conversation even during dialogue that did not involve her.

Circle Theatre did an excellent job of putting on Mistakes Were Made. The set, costumes and energy of the actors meshed together into a very enjoyable performance.

MISTAKES WERE MADE by Craig Wright Circle Theatre

Reviewed by Eric A. Maskell, Associate Theater Critic
for John Garcia’s THE COLUMN

MISTAKES WERE MADE plays through June 30th

Tickets are $20.00-$30.00. Students, seniors, military and
groups of 10 or more receive a $5.00 discount. High school
and college students with valid school ID may also purchase
tixs for half price 30 minutes before curtain, if available.