Home › Theater Reviews › The Murder at the Orient Burlesque

The Murder at the Orient Burlesque 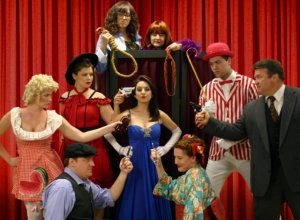 At first glance of the title I assumed this play would be a spoof on the murder mystery “Murder on the Orient Express”. Fortunately, or unfortunately depending on your perspective, it wasn’t and the only thing the two had in common was murder.

A new stripper had been hired at the Orient Burlesque who, either by deed or sheer presence, offended all or almost all of the current staff. Czarina Katherina Anastasia Faberge Antoinette, played wonderfully by Alexis Nabors, was brought in to turn the run down Orient Burlesque back to a hotspot for entertainment, or so it would seem. From friction to foul play the antics of the Czarina stirred up more than just profits resulting in a multiple attempted single homicide. At the end of Act I its curtains for the poor Czarina.

And the fun didn’t stop there as the remaining staff tried to avoid suspicion and arrest while a determined detective attempted to solve the mystery of her death. Or, more importantly: WHO delivered the killing blow?

The set design was fitting. The theater was set up with a thrust stage and several small tables flanked the stage for patrons to sit. This gave the impression that one was entering an actual burlesque club. The majority of seats was in stadium fashion facing the main stage and curtain and allowed easy viewing for everyone. Additional seating ran along the walls but gave me the impression that they were just attempting to cram in as many seats as possible and, at least for me, took away from the overall affect. Patrons sitting at the tables were treated to a seat within the performance. Several of the cast engaged directly with audience members seated at those tables. The seats were first come/first serve so if you wanted to be an active viewer then you had to arrive early. The actual set was divided into the burlesque stage and the women’s changing room by a large curtain that split in the middle. The curtain itself added to the affect with its tears and hand-prints and overall shoddy looking appearance giving the impression of a truly run down, unkempt theater.

The costumes, music and lighting all came together in perfect harmony of a bad burlesque show. The costumes were displayed during the transition burlesque sequences and made the viewer feel as if they were watching an actual burlesque show. During the ‘backstage’ action the costumes were robes and various under garments as one would expect in a dressing room as the entertainers changed. The music was old school camp and fit perfectly. The director did a wonderful job of having Abe Manganelli (Jonathan Winsor) accompany the comedic acts/transitions with a drum rimshot.

It’s difficult to put on a great show. However, I imagine it’s very difficult to put on a good show in a bad way. For actors to stumble through lines, perform awful dance routines and generally give the impression of a show that should have been put out of others’ misery was a testament to the acting abilities of the cast. In this instance, the cast did wonderfully.

The characters were outlandish and over the top. The actors did a great job. I was impressed with the accent of Walt Michaels (Rich Hancock). The manner in which he carried the character made me feel like he was the owner of this run down establishment. I was also impressed with the way Czarina (Nabors) transitioned from an accent to no accent. The character Jane Katz (Allegra Denes) should have been older because of her ties to Tallulah Lazarre (Sue Goodner) and the many references to the `old days’. Denes played the character well but just didn’t have the age to carry some of the lines. Additionally, it may be due to first weekend/world premiere jitters but a few of the accents seemed to come and go throughout the play. One of the highlights of the play was in the second act when Lazarre (Goodner) is explaining her hatred of Czarina (Nabors) to the detective. The monologue was heartfelt, sincere and beautifully performed.

The play started boldly, using vaudeville comedic acts and burlesque numbers to transition the scenes. However, the second act seemed to slow a bit as the detective interviewed the suspects regarding the murder. The transitions were still smoothly choreographed. Instead of using a blackout, when the burlesque show was halted due to the murder, the director dimmed the lights and had the characters dance into their new positions within the next scene. Since the set was of a minimalist design, this allowed the pace to keep going without constant curtain openings. The majority of the problems I felt were in the second act. The second act seemed to slow, which was more or less due to the interrogations of each character. The scene where Katz (Denes) “freaks out” was overplayed and way too long. It detracted from the overall speed and flow. The Detective Ira “Red” Flannegan (Otstott) was a bit underplayed and the accent, even though peppered with `faith and begora’, didn’t seem to stick. In a play of over the top, outlandish characters, the soft voiced detective seemed to disappear.

According to the program notes, this particular world premiere was a long time coming. Apparently the first act received a staged reading in 2003 and through many rewrites and perseverance the finished product was premiered this month. As a theater patron, I’m glad it was. The overall play and performance was wonderful with its light-hearted and comedic tones. There were some risqué moments – it is burlesque after all – but for the most part all those who attend should leave feeling entertained.

MURDER AT THE ORIENT BURLESQUE

Tickets are $16-$20 with $2 discount for students and
seniors. Payment online is through PayPal.

For tickets and information, please call 972-849-0358 or go
to www.roverdramawerks.com.