Murders in the Rue Morgue 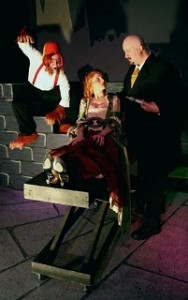 Who but Pocket Sandwich Theatre would think that popcorn and Edgar Allan Poe would go so well together?

I had heard great things from my wife about Pocket Sandwich Theatre and to my delight I was not disappointed. The theatre was a marvel of design tucked into the corner of a modern day shopping center. Due to the fact that food and beverages were available 1 ½ hours before curtain, my wife and I got there early in order to eat dinner before the show. The seats were arranged in such a way as to fully utilize the space for the play and yet still allow servers to walk around. The food was reasonably priced and the service was well done. I would suggest making reservations in advance because the shows sell out rather quickly.

The play is based on the story by Edgar Allan Poe and centers on a series of murders in Paris around “La Rive Gauche” of the Seine River, 1890. The mysterious Dr. Moreau is conducting experiments on unsuspecting women while Auguste Dupin and Professor Henri pursue him and attempt to stop his nefarious plans, with the aid of the bumbling Prefect Barnard. The program touts the play as “A Popcorn Tossing Comedy Thriller” and Pocket Sandwich Theatre delivers.

The set design was a one piece minimalist exterior view of the Rue Morgue that allowed the actors easy access on and off the stage. There were stairs, a balcony and several doors that facilitated the story. The color scheme was impressive. The subdued blues and grays painted on the walls added to the creepy, dark mood.

The music, while well choreographed, at times drowned out the actors and made it difficult to hear dialogue. At the beginning of the play the theatre stated that certain musical cues would allow the audience to participate vocally by cheering for the hero or booing the villain.

Unfortunately I did not feel the musical cues were well defined or sufficiently different to allow for audience participation.

Additionally, it was difficult to ascertain who of the main characters the hero truly was in order to cheer. What should have been a musical aid in fostering audience participation just devolved into the audience booing the villain whenever he entered onstage.

For the most part the costumes were well tailored and reflected the time period in which the play was set. However, the costumes for the Prefect Barnard and Camille L’Espanay seemed a bit out of sorts. Barnard’s costume was a little lackluster and barely resembled that of a policeman or gendarmerie. Camille’s costume was a bit revealing in my estimation. The character had a back story of being a doctor of veterinary medicine and sported a corset that revealed a bra most of the time. The dress fit the character’s persona as Camille spent most of the play complaining about the lack of intimacy between her and Auguste but it did not seem to fit my definition of a doctor of veterinary medicine in the 1800’s.

In any campy comedy of this sort it is the actor’s job to maintain the character even through the absurdities that lie around every corner. Actors are often called upon to maintain a straight face as the audience around them erupts into laughter. These actors did a superb job. Many of the funniest moments in the play centered on the actors’ response to the audience.

Matthew Allis as Auguste Dupin and Bill Otstott as Professor Henri performed their parts well. Allis was a little more outgoing and outspoken than the quiet Otstott but the team worked well together onstage. It was unclear if this duo was considered the heroes of the play or if that title went to the bumbling police chief Barnard played by Michael Murray. At times it seemed like police woman Isadora Muset played by Allegra Denes was the heroine of the story but then near the end when she was investigating it became apparent that the police force in Paris was inept. Inept, that is, at everything except completing crossword puzzles. It was like watching Mr. Magoo meets the Scooby Doo Gang, and then try to solve a mystery.

As in most comedies of this type the villains were a little easier to spot. With the exception of Bongo played by Matthew Stepanek, the villains were large, creepy dark figures. Caleb Ouko did a wonderful job as the henchman Janos. Whether by design or not, Caleb was the only actor not speaking with a French accent. As odd as it seemed, it worked well for the part. Patrick H. Douglass performed well as Dr. Moreau. His sheer size gave an imposing quality to the doctor. However I would have liked to see a more sinister nature performed. He didn’t seem like an evil person that warranted booing or the throwing of popcorn; he was more like a misunderstood scientist. Matthew Stepanek as Bongo had the best role of the play. Bongo was the intelligent monkey experiment created by Dr. Moreau. Stepanek seemed to revel in the physical aspects of the role and played them up for the audience.

There were a few characters that supported the play well. Camille L’Espanay, played by Shannon Rasmussen, was the main supporting character. The girlfriend of Auguste Dupin, Camille was the lust focus for Bongo. Rasmussen played the part well. Her French accent was well done and didn’t seem to waiver. Valerie R. Horna as Miniette Roux, however, had a difficult time with the accent. Her voice got louder as she spoke and her accent waivered quite a bit.

Mike Bacon did an admirable job in his performance as Willie Byrd, a character in my opinion that was in the wrong play. Based on the outfit and accent that Byrd sported he was an American cowboy. Either I missed it or it was never mentioned what exactly an American cowboy was doing on the Seine River in the 1800’s but it seemed out of place.

Jennifer Stoneking played both a murdered dancing girl and Madame Donnier, the landlord for August Dupin at the Rue Morgue. Stoneking did a great job portraying the drunken dancing girl kidnapped by Bongo. She did an even better job as the bitter landlord Madame Donnier. Her one-liners and sarcastic comments were delivered well and received a laugh from the audience each time. Kevin Thrasher did a wonderful job as The Emcee.

Pocket Sandwich Theatre is not just offering a performance but an experience. To truly appreciate the play you will need to go with an open mind and an upbeat attitude. While there are a few issues that will probably be ironed-out over time, the play is very entertaining and the experience enjoyable.

I recommend going early and eating there prior to the performance. If you are only expecting to come watch a play, then this is not it. If you are interested in engaging in a theatrical experience complete with booing, cheering and the throwing of lots of popcorn then this is the theatre for you. Reserve early, go often and throw hard.

MURDERS IN THE RUE MORGUE

For tickets and information please call 214-821-1860
or go to www.pocketsandwich.com.