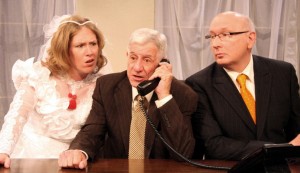 Who will you vote for?

November by David Mamet, a political comedy about the final days of a President’s first term in office, is Stage West’s satirical answer. The play opens with the President mere weeks away from the November election and the numbers don’t look good for re-election. The President, Charles Smith, blames his failing campaign on lack of financial support and immediately contacts his political committee. The committee advises Smith that not only is there no money for advertising or campaigning but there is no money for a presidential library and that he should just accept defeat and forget the library.

Smith immediately turns to Archer Brown, his most trusted adviser and lawyer, for advice. According to Brown, the President should just accept defeat and bow out gracefully but maybe sell a few pardons on the way out. Accepting the fact that he probably won’t be re-elected but not wanting to go home broke, Smith embarks on a scheme to procure funds for his presidential library. Brown, the ever faithful lackey, reminds Smith that any campaign funds not used at the end of the term can be taken by Smith.

Opportunity comes knocking in the form of the Turkey Guy, a representative of the National Association of Turkey By-Products Manufacturers. Every year at Thanksgiving the President pardons a turkey on national television for a campaign contribution of $50,000. This year, however, Smith decides things are going to be different.

The hilarity and hi-jinks ensue when Smith decides that the price of a turkey pardon has just gone up. From changing history to lesbian marriages, President Smith decides nothing is too outrageous in his effort to build his presidential library.

The set design for this play was immaculate. The moment we entered into the theater the lights were on onstage and we could see the entire set. The theater seating was in a stadium like fashion so there were no bad seats. The set was a one piece mock up of the oval office. As soon as we entered the theater we had the sense of presidential majesty. From the flags behind the presidential desk to the presidential seal painted on the floor, the set designer, Jason Domm, spared no details. Additionally, Lynn Lovett, Props/Set décor, did a wonderful job filling in the minutiae of the set. The pictures on the walls, the lamps, tea pots and even a typewriter all added to the ambiance.

The costume design was practical. The basics, suits for the men, were well tailored and fit appropriately. The stand outs in costume design were the American Indian headdress worn by Chief Dwight Grackle and the wedding gown worn by West Wing staffer Clarice Bernstein. Both of these items added a certain shock and outrageous quality to the performance.

In a play of this type the speed and delivery of the dialogue was of utmost importance. In this regard, the actors performed beautifully. The banter between Charles Smith played by Jerry Russell and Archer Brown played by Jim Covault was interesting and believable. It felt as if these two had been friends/political partners for quite some time. A few times the actors jumped the lines a little bit, anticipating the others response but by then end the witty banter was humming like a well oiled machine.

Russell did an excellent job portraying Charles Smith. A great deal of the dialogue consisted of phone conversations. Often times it could be difficult to perform one-sided phone conversations but Russell did a masterful job of it. There were a few times the conversations seemed a bit rushed but on the whole Russell gave an admirable performance. Russell made smooth transitions between despair at losing the election to elation at finding a new angle for campaign contributions. During the course of the play the peaks and valleys of the characters emotions were so numerous that it was difficult to keep up but Russell performed them well.

Covault played Archer Brown, the straight man to Smith’s manic depressive Presidential woeful nature. At the beginning, Covault seemed a little shaky but by the end of Act I he was comfortably settled into his role. My wife and I were still not sure if it was opening night nerves or if Covault was merely acting nervous in character. Where Smith was flighty and flaky, Brown was monotone in both speech and personality. Covault performed it well. Almost too well I would think. In Act II Brown began to have issues with Bernstein and got upset to the point of calling her a “traitorous swine”. Bernstein was apparently the cause of the end of American civilization as we know it. Unfortunately, the line delivery was flat. Covault never got the feeling across that Brown was truly upset with Bernstein.

Donald Jordan played the Turkey Guy. In the original Broadway production the character was referred to as A Representative of the National Association of Turkey By-Products Manufacturers. I assumed while the names were changed the character remained the same. Jordan masterfully crafted an Alabama turkey lobbyist. The accent and mannerisms were enjoyable. A few times the accent made the dialogue difficult to understand but for the vast majority of the play Jordan came across well.

Sherry Jo Ward played Clarice Bernstein, the lesbian speech writer to President Smith. Ward did an excellent job in her portrayal. Bernstein had recently returned from adopting a child in China and was suffering from a cold. Ward did an amazing job. Sometimes actors portray a sick character as if they were lying at deaths door. The way Ward delivered her lines with a stuffed up nose and intermittent sneezing gave me the impression she was sick but still capable.

Rob Bosquez played Dwight Grackle, the Chief of the MicMac tribe. Towards the end of the play when it seemed like things couldn’t get any worse for President Smith, Grackle burst forth on to the scene to exact revenge for an affront perpetrated on his people by the outgoing President. At first, Bosquez did an amazing job as Grackle. His boisterous dialogue and mannerisms lent realism to the slighted Indian chief. However, the scene tended to get a bit choppy as Grackle tried to shoot President Smith with a blowgun dart. It was as if not enough direction was given and the actors were unsure as to the staging of each character. Bosquez and Russell kept awkwardly shifting on stage until each hit their marks. Another odd moment was when Grackle seemed unsure what to do as he sat motionless in an Oval Office chair.

Stage West packed in powerful performances with all the perfect elements. The dialogue was fast paced, lively and entertaining while the set design, props and costumes added to the overall atmosphere. Avoid the long lines at the polls, the hanging chad and the uncertainty of who to vote for and head over to Stage West for the side splitting political comedy “November”. Politics has never felt so good.