Home › Theater Reviews › Over the River and Through the Woods

Over the River and Through the Woods 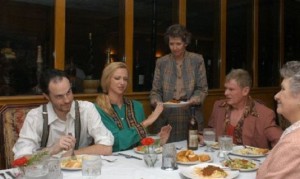 Family. Or more importantly, TENGO FAMILIA (Keep the family), is what Artisan Center Theater offers up with OVER THE RIVER AND THROUGH THE WOODS. A large helping of family with a heaping side of laughter. The warmth with which the Artisan Center Theater entertains is always inspiring. The genuine way they care about their patrons and their performances tends to shine through all their shows. This show in particular has a family warmth that you can feel as you walk into the theater.

The play, written by Joe DiPietro, follows the life of Nick as he interacts with his four grandparents, Frank, Aida, Nunzio and Emma. The majority of the action takes place in Frank and Aida’s house. The story opens with Nick arriving for Sunday dinner. After his parents move to Florida and his sister marries and moves to California, Nick takes on the responsibility of caring for his grandparents, or so he thought. His grandparents, headstrong and outspoken, are hard working Italian immigrants with their own ideas of how the world, and more specifically the family should run. Over the years Nick has made it a point to attend weekly dinner with his grandparents, sometimes begrudgingly. On this particular evening Nick has some very important news.

He has received a promotion and intends to move to Seattle, Washington. “Not the close Washington” as Nunzio points out. The grandparents, not willing to let Nick leave without a fight, immediately hatch a plan to give Nick “something” to stick around for. That something is in the form of Caitlin O’Hare, a tall, attractive blonde nurse that Emma met in the produce aisle at the local grocery store. The laughs ensue as Nick tries to shield his new “friend” from his grandparents matchmaking attempts. The play is charged with emotional monologues and quick comical banter that results in a roller coaster ride of laughs and cries.

The setting was that of the Gianelli home in Hoboken, New Jersey. The program boasted an Italian flag on the cover. If Artisan was attempting to portray an Italian family then I was greatly disappointed. The accents were not Italian, the mannerisms were not Italian, and the feeling I got was not Italian. However, what Artisan did accomplish was broadening the aspect of the play to encompass ALL families. This wasn’t a play about Tengo Familia. This was a play about all families.

Aside from the Italian flag on the program cover and the notes about the play being about Italian immigrants, I never once got the impression that it was limited in scope. Yes, Aida force fed the family at every given turn but what grandmother doesn’t? What I saw was a play about family. Parents who loved their children enough to send them to a foreign country at the age of fourteen for a better life. Grandparents who were willing to sacrifice their lives and their dreams so their children and grandchildren could reach further and higher than they thought possible. Well done.

The set design was minimalist in nature but added greatly to the ambiance. The set was essentially the living room/dining room of Frank and Aida Gianelli. The couch and chairs were covered in doilies and blankets while the table was covered in dishes, poised and ready for the next meal to grace its plane. The southwest exit went into where I imagine was a fully functioning and very active kitchen, since the food seemed to always come out steaming. The southeast exit deposited the actors onto what was essentially the front porch. The set elicited a come hither warmth from the moment we walked into the theater. The detail extended all the way down to the faux wood floors.

I also applauded the Artisan’s use of real food, even though I left the theater hungrier than I arrived. Sometimes theaters fore go certain props due to difficulty in preparation or just a simple lack of feasibility in creation. Actors often times have to pantomime the most basic functions such as eating and drinking which can lead to odd exaggerated gestures. In this instance, the Artisan used real steaming food. The actors were free to eat, talk, laugh and perform as if at a real dinner table. It was charming and genuine.

The costumes were adorable and appropriate for the time. The play took place in the 1980’s so current attire was generally acceptable. What I enjoyed most from the costumes was the use of sweaters. Every time Nick complained that the house was too hot, the grandparents were wearing sweaters. The nuance was not lost on the audience. Nick talked about it being hot in their house; not just hot, but sauna hot. Who hasn’t been the pleasant recipient of an elderly relative’s sauna? As grandchildren we could relate.

The actors did a wonderful job conveying the warmth of family. The most distracting thing about the performance was the constant pivoting of the actors. At times, during dialogue, the actors would end up with their back to the other actors. I assume, because of the theater in the round aspect, the pivoting was meant to allow the audience to see the actor’s face, but it quickly became a bit of a nuisance resulting in awkward moments whereby the actors looked as if on a music box.

Michael Speck did a superb job as Nick. His facial expressions and mannerisms conveyed his laughter and angst. Speck had great comedic timing delivering his lines and showed genuine warmth towards his grandparents.

In this play Nick had two sets of very different grandparents. Frank and Aida were the concrete and mortar of the family foundation while Nunzio and Emma were the paint on the walls. I imagine the reason the Sunday dinners were held at Frank’s house was due to his stability more so than location. Frank built the house with his own two hands while Aida prepared every meal. Nunzio and Emma would whirl in, kick up the dust, and ride out towards the sunset. All four actors gave a remarkable performance.

Phil Nixon portrayed Frank Gianelli with a quiet reserved confidence.  During most of the play Frank seemed like the strong silent type. A man of few words who built the Gianelli house as Aida so graciously told us, “for her”. However, when Frank gave his monologue about his father and how he came to America, there wasn’t a dry eye in the theater. Nixon delivered the monologue with passion.

Susan Spangler played Aida Gianelli and gave an admirable performance. However, she seemed preoccupied with the table settings and blankets. It may have been due to her characters constant need to rush to the kitchen or being responsible for ALL the food but in Act I, though lines were delivered well and with sincerity, it was as if she were a few seconds behind the rest of the cast.

Another strong performance was that of Burl Proctor as Nunzio. Proctor portrayed Nunzio as more Italian than the rest of the actors. Nunzio had an accent and mannerisms, such as hand gestures, that had the outward appearance of Italian. The accent at times wavered but Proctor put in by far the most realistic Italian performance. In this play Nunzio was one of the more emotionally charged characters due to his illness. Proctor did an amazing job at conveying that emotion.

Emma, the wife of Nunzio, was played by Barrie Alguire. Alguire did a great job. She was grandmotherly yet outspoken enough to be Nunzio’s wife. Emma was another of the emotionally charged characters. She not only had to deal with her grandson leaving but also her husband’s illness. Alguirre conveyed her joy, disappointment and sorrow with equal passion.

Tiffany Long played Caitlin O’Hare, the “something” for Nick to stay in New Jersey. Long was charming and passionate in her dialogue however she seemed too focused on stage position. She seemed more concerned where the director had blocked her on stage, or more importantly where she was SUPPOSED to be on stage than the actual dialogue itself. When Caitlin explained to Nick about her grandmother and her feelings about how he treated his grandparents it was lacking. The words were there but the emotion was empty. Prior to that though, I was impressed with Long’s performance at the dinner table. She demonstrated a genuine purity of spirit and easy going attitude as the grandparents tried to set her and Nick up on a blind date.

OVER THE RIVER AND THROUGH THE WOODS

Artisan Center Theater
418 E. Pipeline Road, Hurst, Texas 76053
OVER THE RIVER AND THROUGH THE WOODS through October 1st, 2011