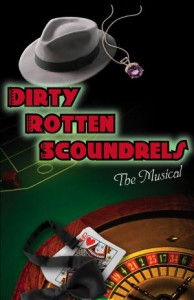 Oh what joy the audience will see, when these characters practice to deceive!

Dirty Rotten Scoundrels by Runway Theatre is ALL about the CON. Lawrence is a suave, smooth talking con man with a pretty sweet set up in Beaumont Sur Mer in the French Riviera. With his sidekick Chief of Police Andre, Lawrence, with subtlety and charm, relieves various rich debutantes of their precious valuables. The year is going well for Lawrence until the vulgar American shyster Freddy steps off the boat. From the first meeting in the cafe between Lawrence and Freddy to the final reckoning, the two get along like oil and water.

Lawrence detests Freddy’s crude attempts at conning women and would like nothing more than to see Freddy move on down the coast. Freddy, after discovering that Lawrence is much more of a successful con man than himself, desires to have all the “Great Big Stuff” that Lawrence has. Freddy blackmails Lawrence into teaching him the big cons. After a con goes awry Lawrence and Freddy decide that the town is not big enough for two con artists and wage a bet for the fate of Beaumont. The bet? Be the first to swindle $50,000 from Christine the “Soap Queen”. Winner takes all.

From the opening act with Lawrence’s (Malcolm Beaty) sly smile and finger snapping spotlight to the dirty rotten finale, Runway Theatre exploded with energy and taste. The red curtain split, slid back and the stage was set for some hilarious hi-jinks. The set design was artfully crafted – a two story stage with stairs descending in the back. At times during the musical the left wall was rotated perpendicular to the main set in order to block off a hotel room. Both the main set and the rotating wall were beautifully painted and masterfully designed. This was an elegant, tasteful resort.

The costumes added to the overall atmosphere of the musical. The costumes for the main characters were predictable yet remarkably done. Lawrence wore several suits that fit nicely. Freddy was clothed in shorts, sports coat and some tennis shoes. Appropriate for a shyster. Jolene was clad in a cowgirl type outfit, Muriel was adorned in fancy evening gowns and Christine was wrapped in a dress. Some of the ensemble cast played background extras and milled around during some scenes wearing appropriate attire such as suits or evening gowns, depending on the scene.

Malcolm Beaty gave a wonderful performance as Lawrence. His sly smile lit up the set. At first I wasn’t sure if Beaty was going to be able to pull it off. I admit I was biased by Michael Caine’s performance in the film version on which this musical is based on. All concern fell away the moment Beaty began “What They Want”. His inflections and mannerisms set the tone for his character throughout the musical. His singing was artful and full of energy. There were a few times the music seemed too loud and the lyrics were lost but for the vast majority of the musical Beaty projected well and made the character his own.

Jack Agnew must have taken Beaty’s performance as a personal challenge and gave a stunning portrayal as Freddy. Agnew played the comedic role well. Even when he was passed out on the floor as Ruprecht (Freddy in disguise) or sitting idly by watching Lawrence at work Agnew was fully engaged with the audience. It was remarkable watching Beaty and Agnew as they played off each other during the more comedic scenes.

Mallory Brophy was amazing as Jolene. Brophy put in a lot of work on this musical. She played Jolene, the rich debutante from Oklahoma, choreographed the dance routines, and she was also in the ensemble cast. Her rendition of “Oklahoma” was a blast. The energy was contagious and the moment the ensemble cast joined her on stage in their cowboy/cowgirl outfits it was a boot stomping, heel kicking good time. It was like watching Elly Mae Clampett dance across the French Riviera. Yee Haw!

On the other hand, Muriel, played by Liz Woodcock, was the epitome of opulence. Her songs were more subdued and emotional. Woodcock did an outstanding job. She brought a sense of charm and sophistication to the character.

Laura Alley played Christine, the “Soap Queen” and mark for Lawrence and Freddy’s con game. Alley’s singing was top rate and her acting was wonderful. She showed an incredible range and depth, from her comedic “Here I Am” where she knocked people over at every turn, to the more sincere “Nothing Is Too Wonderful To Be True”.

Andre, the French Chief of Police played by Greg Kozakis, was both charming and humorous. Kozakis’s French accent never seemed to falter. His songs were fluid and graceful. One of his most memorable songs was “Chimp In A Suit”. However, Kozakis seemed unable to decide where to place his hands during dialogue. When he wasn’t speaking or when someone was speaking to him his hands displayed a life of their own. They gripped the side of his sport coat and then down to his sides and back again.

Runway Theater put on an excellent performance of Dirty Rotten Scoundrels. All the elements of a great musical came together for the enjoyment of the audience. The light hearted songs, quirky characters and a sound story pushed it all forward. The cast did an amazing job of singing, dancing and having fun. The joy with which they performed this particular musical showed on all their faces. If you are looking for a fun, fresh, lively and entertaining evening of music, don’t get conned by other musicals. Go see Dirty Rotten Scoundrels.

For tickets and information, please call 817-488-4842 or go
to www.runwaytheatre.com