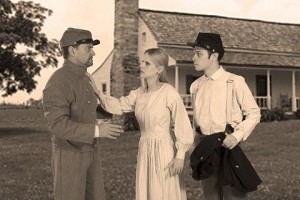 The Civil War as produced by the Artisan is by far one of the better musicals I have seen lately. ****SPOILER ALERT**** – the North wins. In a nutshell, the basic premise of the Civil War is that the Confederate South fights the Union North over slavery and voting rights. In this musical, the story centers more on a small group of soldiers from both sides as they begin and finish the war and how their stories intertwine.
The set design by Dennis Canright and Nate Davis was phenomenal. The east wall was painted a Union blue while the west wall was painted Confederate grey.The north and south walls were a blended bluish/grey as the colors crossed over to the other side. The imagery was powerful.

The audience could see how, as they approached the middle, the colors and thus the ideals of both sides became blurred. The stage was essentially several rotating staircase platforms. It worked well because it gave the actors some elevation from which to project during songs, and the versatility of the design made rotating and changing the landscape fluid.

Another bonus to the set design was the slideshow projections on the east and west walls. During several points in the musical pictures of actual civil war photos were projected, adding a museum quality to the performance but also grounding the musical in actual history.

The costume design by Rebecca Roberts was well done and period appropriate. Several of the costumes, especially the ones worn by David Plybon and David Cook, were well tailored and authentic looking. As the musical and thus the war itself moved forward, some of the costumes became more and more weathered and damaged.

The choreography by Dennis Canright was fantastic. The actors sang and danced up, down and around the platforms. The platforms rotated and shifted while they sang. The platforms and staircases also reconnected into different patterns and levels with ease. The entire performance seemed like a fluid waltz of bodies set to music and motion.

The light design by Nate Davis was well choreographed and emotionally powerful. At one point during the song “Sarah” and “Honor of Your Name” the lights shown from behind Jack Bristol and added an ethereal ghost-like quality to the performer.

Musicals by their very nature tend to live or die by the songs performed. In this instance the musical was not only alive, it soared. The songs were superbly sung by this cast and the acting performances were impressive.

David Plybon did an outstanding job as the Union general. His songs “If I Should Lose My Way” and “Judgment Day” were emotionally touching. Regardless of what song Plybon sang, his voice carried loud enough for easy audience understanding.

David Cook was another impressive singer. His performance of “Virginia” was superb. Cook was able to carry the song with a very southern twang to his voice which added to the depth of it.

The song “Tell My Father” as sung by Michael Salvador was one of the more emotionally raw pieces of the entire musical. As Salvador sang, other Union soldiers carried bodies of dead soldiers wrapped in linen to the gravesite. As body after body passed by Salvador, he poured his soul into the song.

Finally, the soldiers placed a body on the same platform as Salvador and pushed both towards the waiting gravesite as the audience was left to realize that the body on the platform was the recently departed Salvador. Another emotionally powerful moment was when Jack Bristol sang “Sarah”.

As Bristol sang, Sarah, played by Mady Malouf, read and reacted to his letter. When Malouf sang the next song, “Honor of Your Name”, and the audience realized that Bristol’s character would not be coming home from the war, the tears began to flow. “If Prayin’ Were Horses” was also well done and emotionally powerful.

Demetrius Murray and La’Netia Taylor played a slave couple torn apart by the slave trade. At the end of the song, when the platforms with Taylor and Murray were split apart and each was pushed to the far corners of the stage, my heart sank.

The musical was not all somber and sad. In this instance, as in any conflict, there are upsides and downsides. One of the more upbeat songs was sung by Elias Villeda, touting the positive virtues of his “Old Grey Coat”. The song was light-hearted and wonderfully performed with heart and humor by Villeda. David Priddy did an excellent job with his rendition of “North Bound Train”. It was uplifting and gave the audience a sense of hope in the future.

Another good performance was by Noel Allen when he sang “I’ll Never Pass This Way Again”. It was superbly sung and masterfully projected throughout the theater.

There were, however, a few glitches that seemed to hinder the overall performance. Several times the sound system would reverberate poorly and cause some cringe worthy distractions.

Also, during the song “By the Sword/Sons of Dixie”, it was next to impossible to hear the confederate soldiers singing. It was also difficult to hear the words of another song, “How Many Devils”.

The choreography was outstanding as the confederate and union soldiers marched up, down and around the platforms but the words of the song were drowned out by the music so it lacked the impact that it could have had.

Overall, I was blown away by the sheer power of this piece. The Civil War by Artisan Center Theater was like watching history unfold before you, with the added bonus of a musical tapestry interwoven through the visual feast.

Monday/Tuesday/Thursday/Friday/Saturday evenings at 7:30pm and Saturday matinee at 3:00 pm