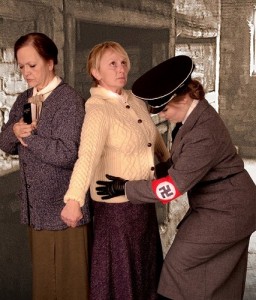 The Hiding Place, as produced by the Artisan Center Theater, is a deeply moving and emotionally impactful play. It follows the lives of the Ten Boom family as they struggle with the Nazi invasion of Holland and the atrocities committed against the Jewish people. It is a story of sacrifice, perseverance and forgiveness.

The story opens in 1937 with the Ten Boom family celebrating the 100th anniversary of their family’s watch and watch repair business. As the Second World War begins to tear apart Europe, the family gets increasingly more and more alarmed at the atrocities sowed upon the Jewish people by the Nazi army. As a deeply religious Christian family, the Ten Booms decide to help the Jewish people in any way possible. The play continues through the horrors and triumphs of these families as they endure the hardships of such a horrific part of our history. The play centers mainly on Corrie Ten Boom and her sister Betsie as they attempt to reconcile their faith with the horrors of the Second World War.

The set design by Eve Roberts and Nate Davis was masterfully crafted to envelope the entire theater. Corrie’s bedroom was in one corner while in another corner the watch shop, replete with painted mural clocks and door with old-time doorbell, added to the old world charm. Corrie’s bedroom had a false door in the closet and the wall was transparent enough that you didn’t lose the fact that there were six people hiding in the wall. The painted town murals on the south and west walls added to the open air feeling when the play took place outside in the town streets.

I particularly enjoyed the train scene, not in the sense of joy or elation but more in the sense of raw emotion. The set was a low twelve inch wood frame that simulated a box car and once the prisoners were on the “box car” the lights went off and train sounds began. The whole scene was well directed and evoked a feeling of fear and despair.

Rose Anne Holman’s portrayal of the faithful Betsie was both authentic and emotional. Betsie was the solid rock of faithfulness that Corrie tended to lean on during tough times. During the incarceration at Ravensbruck, Betsie was the one that inspired Corrie to new heights. Holman was able to portray Betsie as both strong in her faith and weak in her physicality.

Judi Conger’s performance as Corrie Ten Boom was masterfully done. Conger was required to go from jubilation to devastation in the span of the play and was more than capable of digging deep during the darkest of times. Corrie gave an impassioned plea to God during one of the more impactful moments when it came time for her to either forgive the Kapetyn that so devastated her life or turn her back on the faith that carried her through her darkest moments. Conger delivered big time. The impassioned plea was soul jarring in a deep meaningful way.

Chris Seil was excellent as Casper “Opa” Ten Boom. As the patriarch of the Ten Boom family, Opa was the foundation of their family.
Seil’s performance had the air of aged wisdom intermixed with approachability. Opa was the typical approachable grandfatherly figure ready to dispense knowledge and wisdom and Seil was able to hit the mark dead on.

Tim Dewhirst as Willem Ten Boom, the older brother, was both inspiring and distracting. Dewhirst acted the part well and the audience could feel the emotion, but the accent was weak and inconsistent which detracted from the overall stellar performance.

A stand out performance in Act 1 was by David Seil as Peter. In the beginning, Peter was setting up the celebration and David Seil did a wonderful job of portraying Peter’s youthful exuberance. Peter also had a few other memorable moments when he was overcome by anger at the injustice of the Nazis and David Seil’s acting was authentic and impactful. In a few select words Seil was able to sum up the frustration of a dark time and launch those ideas like a javelin at the very core of Norbert S. Van Tinden, a Dutch traitor responsible for Jewish and Dutch atrocities.

Another outstanding performance was by Paul Borish as Klaus Mueller/Kapetyn. Borish had the unenviable job of portraying not only a villain, but a Nazi villain. Borish did a wonderful job, in a subdued and menacing way, of extracting fear from the Ten Booms. Borish had a commanding presence of Nazi evil on stage that made his end transformation all the more inspiring.

Brian Sears as Chief of Police and Scott Collins as Lt. Rahms both gave admirable performances but missed the mark in what could have been two very emotional scenes. In Act1, Scene 4, the Chief made a plea to Corrie Ten Boom for help with killing a Nazi sympathizer and threat to the Dutch underground. This scene had the ability to really raise the stakes in this drama but the emotion from Sears was lacking and the scene just fizzled into an afterthought. In Act 2, Corrie Ten Boom and Lt. Rahms had an emotional discussion regarding God that had the capability to be impactful but fizzled as well into what amounted to nothing more than a filler scene. Collins seemed unsure of his character and only showed emotion at the end of the scene with a barely raised voice. I didn’t feel the emotion that should have been there in someone who had not seen their family in weeks and was questioning the very existence of God. The exchange between Corrie and Lt. Rahms was more akin to two people arguing over who would pay the dinner check.

I was also disappointed in the accent of John Lattimore as Fred Koornstra. There comes a point where the attempted accent diminished and distracted from the overall character. Lattimore did a good job acting as Koornstra but the accent sounded more Hispanic than Dutch.

Another underutilized character was that of The Snake as portrayed by Kay Barrington. A character that should have struck to the very heart of redemption and divine intervention but fell far short. The problem for me was that I didn’t get the impression that The Snake was warming to Corrie. Aside from a brief pat on the shoulder to Corrie, Barrington showed no outward emotion that her dark Nazi persona was cracking in the least.

Overall, Artisan Center Theater’s The Hiding Place was deeply and emotionally revealing. The sheer raw power of the Nazi atrocities had me wanting to stand and scream “Never Again”. However, this was a story of sacrifice and forgiveness. A story of hope, faith and God. A story of a families’ descent into darkness and the light that they chose to carry through it.

(this play is double cast. List below is from the
reviewed performance):