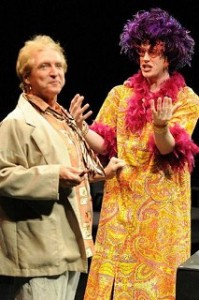 TUNA DOES VEGAS…and the Greater Lewisville Community Theater (GLCT) DOES TUNA. Not only does GLCT do TUNA, they do TUNA well.

TUNA DOES VEGAS is the 4th play in the GREATER TUNA series created by Jaston Williams, Joe Sears and Ed Howard. It originally debuted in 2008 and has fast become a new classic in the already popular line of plays. It follows the antics of the citizens of the “third smallest town in Texas” as they head off to Las Vegas. This year GLCT is offering TUNA DOES VEGAS as their annual fundraiser show. It’s a shame that this production is only a fundraiser with a limited run. This play is phenomenal and is sure to charm all those that are lucky enough to get seats.

The play follows Arles Struvie and Bertha Bumiller as they plan a vacation to Las Vegas in order to renew their wedding vows. The citizenry of Tuna, one by one, decide, much to the chagrin of Bertha, to join the couple. Once in Vegas the citizens of TUNA meet a few new characters and have to overcome several obstacles in order to get back home.

Since I had never been to “TUNA”, I wasn’t sure what to expect. I had heard that the GREATER TUNA plays were very funny and in this GLCT did not disappoint. The play was hilarious. The characters were raw and open. I would like to say there was a hidden meaning or message, but there isn’t. The point was simply a satirical look at small town life. Only, in this context, the small town life invaded the big city – with humorous results.

The set design was very simplistic. GLCT chose a theater-in-the-round model with several large black boxes in the middle. The black boxes represented everything from a kitchen table to a plane with smaller boxes for seats. The only real painted set pieces were large dice placed on the gambling table to signify their arrival in Vegas. The theater-in-the-round model seemed to work perfectly for the play. Three dressing rooms were placed at each corner of the theater with a hidden walk-way behind the last row of chairs on each side. This allowed the actors to run between dressing rooms and appear at other sides of the theater.

While this was probably exhausting for the actors, it added quite a bit to the fast pace and overall appeal of the play. In this instance the director, Kyle Macy, should be commended. He utilized the space well. One character would exit and the actor would reappear as another character on the opposite side of the theater. There never seemed to be any slip ups, missteps or downtime as the actors transitioned. In fact, the actors did a wonderful job playing to all sides of the theater. At the beginning of the play the director stated that there were 42 costume changes in 90 minutes. Which in my opinion would have become tedious had the actors entered and exited from the same side of the stage every time. A simplistic set design, or lack thereof, placed the majority of the focus on the actors and costumes.

In the area of costume design GLCT scored another high mark. Each character that entered the stage wore a signature outfit and hair style. The outfits were well thought out and appropriate for each character. They didn’t look hastily pieced together or like mismatched articles from plays gone by. One of the highlight costumes was that of Charlene Bumiller Pugh. The audience roared with laughter as she entered holding a baby and a child leash that led off stage. The laughter only grew as she pivoted left and right with a child clinging to her dress.

Lyle Huchton did a superb job on costume design. I imagine that in a play with 42 costume changes in 90 minutes we wouldn’t have faulted Huchton had he chose to use a piece twice – maybe a hat with only a minor alteration. That wasn’t the case here. Each character was separately and completely clothed. The characters even had different changes for their Vegas romp. It was truly an impressive feat.

Another impressive feat was that of the acting. Both Tom DeWester and Jerry Downey did a phenomenal job. DeWester, having performed in A TUNA CHRISTMAS at GLCT prior to this, was more at ease with the transitions between characters. He also had a broader range of vocal characterizations. The voices of each character he portrayed had more distinction than that given by Downey. I was particularly impressed with his portrayal of Shot. Shot was the undercover hotel detective in Vegas. The accent and mannerisms felt genuine.

Downey, on the other hand, had greater physical presence with each character. Each one Downey portrayed had a personalized physical manner that was very unique and impressive. One particular instance stood out when Inita Goodwin and Helen Bedd dressed in holiday outfits to work as Vegas showgirls. At the beginning of the scene, when Inita Goodwin was standing on the table in her holiday outfit, I was unsure as to who she was supposed to be. As soon as Bedd entered excited, it became obvious. Both DeWester and Downey did a great job of ad-libing in awkward situations.

At one point Aunt Pearl’s glasses fell off the ‘plane’. Aunt Pearl merely stated that her glasses fell off the plane and that she would pick them up on the way back. The audience rolled with laughter. The actors were well versed in their lines however the pantomime could have been a little more choreographed. Several times it seemed like the cups that the actors were filling should have overflowed and spilled onto the ground. And the flask that Arles had must have been a magic refillable bottle because it never ran out.

While both actors were very talented and put in stellar performances, the play wouldn’t be complete without the help of the dressers. The dressers – Alexys Stone, Frank Rygiewicz, Daniel Curl and Adrienne Vigil – did a wonderful job. The actors never came on stage without costume pieces or appropriate attire. The actors never seemed rushed. They were never finishing getting dressed as they entered the stage. It was just smooth.

Greater Lewisville Community Theatre’s production of TUNA DOES VEGAS rivals that of the original production by Jaston Williams and Joe Sears. The characters are lively and outlandish. The costumes are bold yet polyester; you know who you are…Bertha. The atmosphere is definitely TUNA. The only real drawback to this production is the fact that it only has 2 more shows.