THE 7: An Original Creation by Sundown Collaborative Theatre 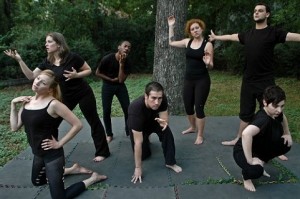 The set design and costumes were minimalist in nature, keeping the heart and soul of this production grounded in the performances of the actors and ensemble. The performance was held in the Green Space Arts Collective building. The stage encompassed the entire dance studio giving the performers ample room for display.

The costumes consisted of black outfits in various forms (shorts, pants, skirts, etc.) with one colored piece of clothing denoting the main character of each segment. As the segments changed the “new” main character would don a colored item such as a red scarf or purple shirt. The simplicity of it was remarkably well done and allowed the audience to easily follow who the main character was.

The first segment, Wrath, involves the Greek story of Persephone. In the story, Persephone is aggressively shielded by her mother from the world. Persephone is not allowed to love, laugh or live. This sheltering sends Persephone into a wrathful rage resulting in death and destruction. Marti Etheridge did an excellent job portraying the wrathful Persephone. Marti’s angry outbursts and high energy conveyed the frustrations of Persephone well. The ensemble cast performed well in their roles of love interests and supporting characters. The only downside to the segment was the god of the underworld played by Candace Cockerham. The god of the underworld part was down played and the impact was lost on the audience. It resulted in the god of the underworld becoming just another face in the endless parade of characters on stage.

The next segment, Gluttony, revolves around Erysichthon, played by Jerome Beck, who is cursed with insatiable gluttony for cutting down a sacred tree. Beck was at top form in his portrayal. His anguished cries and pleas at his plight were intense. You could feel the frustration of his character at not being able to satisfy his hunger. You could see the intensity in Beck’s arms as he clenched his fists in outrage at his situation. For the most part this segment was a monologue for Beck, but one stand out ensemble moment was when the cast formed a moaning, whispering tree with gnarled branches that was simply outstanding. It was elegant and creepy at the same time. As the branches swayed and the whispering moans echoed throughout the theatre you could feel a sense of sad humanity as Beck extolled, “It was just a piece of wood…right?”

The third segment, Sloth, is an interpretative dance piece centered on the Greek story of Daphne, played by Candace Cockerham, and Apollo, played by Nicholas Ross. The story, as told, involves Daphne, who is shot with the arrow of apathy, being pursued by Apollo, who is shot with the arrow of love. The opposing feelings drive Daphne to avoid the situation by transforming into a tree. The ensemble cast in this segment played trees that beckoned and swayed for Daphne to join them while blocking Apollo from his goal. The dance routines were fair and unpolished. The facial expressions of both Cockerham and Ross were performed admirably. In each embrace with Ross, Cockerham’s face expressed true apathy while Ross’s face portrayed only desire. The segment is akin to a battle for one woman’s soul. As Apollo attempts to win the love of Daphne, the trees block and counter each attempt. The frustration builds until the final culmination of Daphne becoming a tree. Ross did an excellent job of conveying his loss as he bestowed one final kiss and consigned himself to becoming part of Daphne’s tree.

The fourth segment, Lust, is the Greek story of Eurydice played by Tashina Richardson who sheds her lustful past when love is bestowed upon her by Orpheus, played by Kelsey Macke. When Eurydice is dragged to the underworld, Orpheus attempts to save her. In this segment the ensemble cast played agents of the underworld who spirit away Eurydice. Richardson did an amazing job portraying the lustful Eurydice. At the end, when she is extolling her love for Orpheus you could see the tears and anguish on her face as she attempts to climb from the underworld to once again relish in the true love bestowed upon her. Kelsey Macke did a wonderful job playing the guitar and singing. Nicholas Ross’ bongo drums added a moody rhythmic component to the segment that only seemed to increase the intensity.

The fifth segment, Envy, was the story of Phaeton, played by Nicholas Ross. Phaeton is the son of the sun god and his only desire is to drive his father’s chariot. His father, played by George Ferrie refuses. The ensemble cast portrayed the chariot. Nicholas Ross did an excellent job at portraying Phaeton as the envious youth only wanting what he wanted without realizing the consequences. Ross’s facial expressions and youthful exuberance in trying to convince his father to let him drive the chariot were often times comical. In fact, this segment was the only one to receive any laughter during the entire performance. The performances were exaggerated and fit well within the framework of the story. The style, along with flash cards for dialogue, mirrored an old black and white silent film era.

The sixth segment, Greed, is the story of King Midas’ daughter Marigold, portrayed by both Marti Etheridge and Kelsey Macke. In this segment the ensemble cast portrayed the king’s loyal subjects as well as the surrounding landscape. The most memorable being that of the stream that the king and Marigold walk next too. The stream was complete with rippling water made real by the undulating arms and fingers of the ensemble. Etheridge played Marigold as Kelsey Macke voiced Marigold through narration. The king was portrayed by Jerome Beck. Macke did an amazing job as Marigold. She started out slowly, as if telling a story about someone else, and then peaked at her rage at being turned back into “normal”. The facial expressions and body language was perfectly attuned to the character. When she was gold and amazed at her beauty, Macke’s eyes gleamed bright-eyed with a childlike innocence. When she was returned to normal her voice saddened and she became disgusted at her father’s “selfishness” at wanting his daughter back only to be denied once again. Her character ran the gambit of emotions and Macke was strong every step of the way. This segment, compared to the others, went a little too long and the impact of the finality was lost.

The final segment, Pride, was the story of Sisyphus played by George Ferrie. According to the notes, Sisyphus was a king that took pleasure in tricking, torturing and killing people. Upon his death, because of his pride, he was forever forced to roll an immense boulder up a hill and watch it roll back down. In this segment Ferrie portrayed Sisyphus well. His facial expressions changed with each victim he came in contact with. The ensemble cast played the victims of his killing rampage. Ferrie was a gifted expressionist and was able to convey with a mere glance the intention of his character. Whether it was lust or murder, Ferrie did an admirable job portraying that feeling without uttering a word. The story was basically Sisyphus torturing and killing people over and over again. The story culminated when the dead grappled onto Sisyphus and attempted to pull him down. The issue with the boulder was lost during the story and I was left feeling that the segment was somehow incomplete.

The performance included a finale where each actor came forward and gave a brief monologue regarding the sin that he or she portrayed. The finale was definitely worth listening too and invited the audience to look harder at sins and look deeper into their own souls.

The performance was only about an hour long but the impact, if allowed, could last a lifetime. The performers were spent and you could tell that all their energy was left on the stage. As the audience left it felt as if we had been there for days. Fighting. Loving. Languishing. Performance art is designed to inspire. It is designed to peak curiosity and engage the senses. The 7 by Sundown Collaborative Theatre did exactly that.