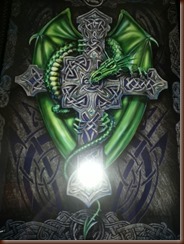 This is how I imagine the life of a Christian is.  Of course the dragon would be replaced with a serpent but you get the drift.  The serpent, devil, satan, evil one…whatever you want to label it, is lying in wait for everyone.  Believer or non-believer.  In John 10:10 Jesus states “The thief cometh not, but for to steal, and to kill, and to destroy”.  However, I believe it is the believer that is the target more so than the non-believer.  How often are we, as believers, whipping ourselves with our own guilt and shame at what we have done?  How often do we expect more from ourselves than we do others?  How often do we tell ourselves “I should have known better”?  The adversary as it is sometimes referred to used to be the Worship leader in Heaven.  One of the archangels of GOD.  The adversary knows the bible, the scriptures, the history backwards and forwards.  For anyone that thinks that enough learning, education or memorization will match what the adversary knows all I can say is what my friend Vizzini says in the Princess Bride…

VIZZINI: Let me put it this way: have you ever heard of Plato, Aristotle, Socrates?

The battle has already been won by Jesus Christ.  It’s time to stop beating ourselves up and start pushing for more ground into the enemies camp…it’s time to put on the armor of GOD and get back in the war.